Projects that are Currently In-Progress

For more information about this project please contact the City of Gilroy Planning Division at (408) 846-0451 or planningdivision@cityofgilroy.org.

The California High-Speed Rail Authority has announced the staff recommendations for the State’s Preferred Alternatives for the high-speed rail routes in Northern California and will soon begin a comprehensive outreach campaign through the summer to gather feedback from the public on the staff recommendations for the Authority Board of Directors to consider in making their decisions in September. Major outreach events will include several community working group meetings in July, and six public open houses in August. Input received from the public regarding these routes will be presented to the Authority’s Board of Directors in September for consideration along with the staff recommendations.

High-Speed Rail will be holding a public meeting in Gilroy on Thursday, August 8 from 5:00 PM to 8:00 PM with the presentation starting at 6:00 PM. The meeting will be located at IFDES Lodge-Portuguese Hall at 250 Old Gilroy Street. All community members are welcome to attend.

In the San Jose to Merced project section, Authority staff recommends Alternative 4 as the State’s Preferred Alternative. Alternative 4 utilizes a blended configuration between San Jose and Gilroy in the existing Union Pacific Railroad corridor before continuing to a dedicated high-speed rail alignment through Pacheco Pass. 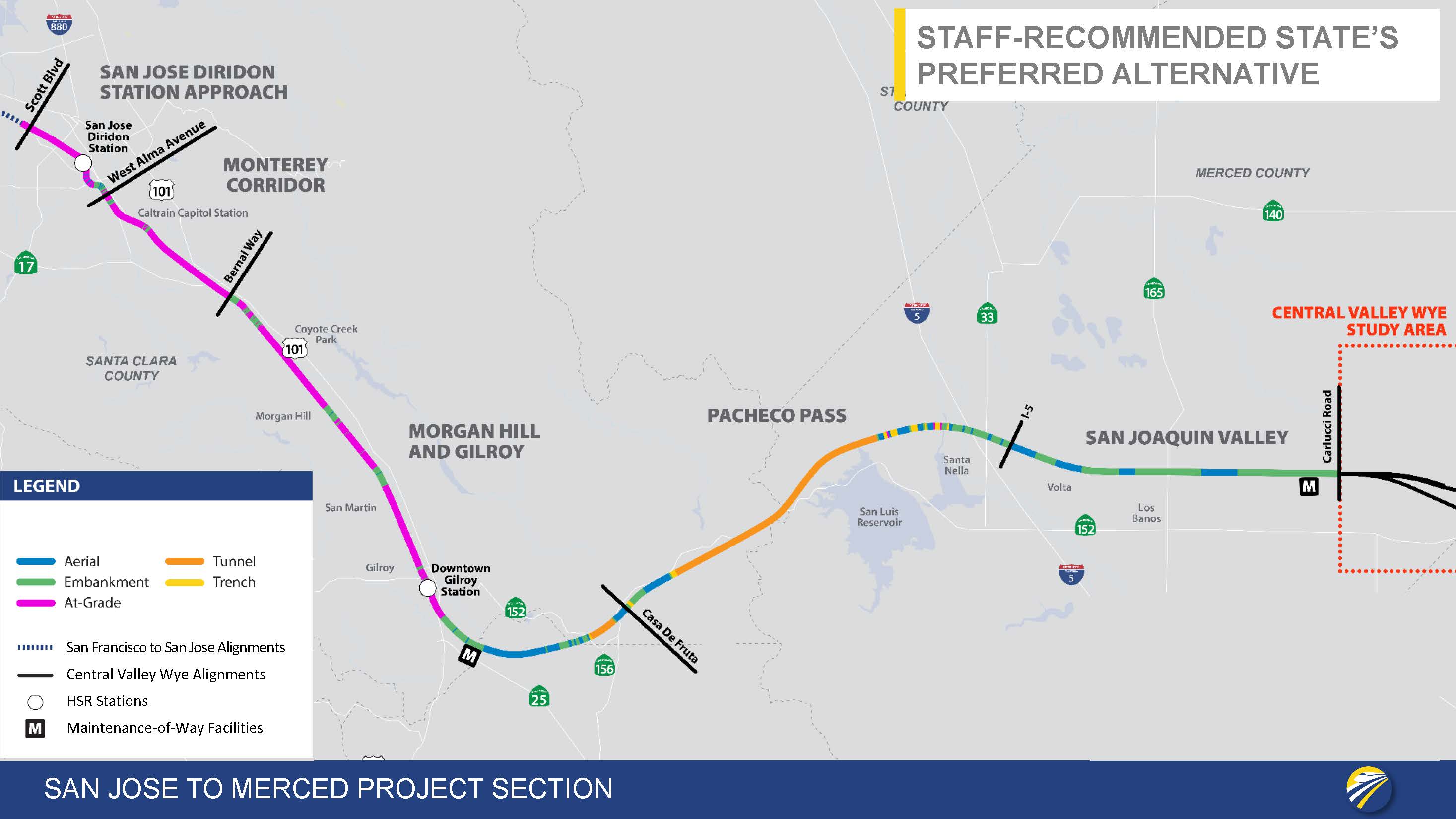 In 2008, California voters approved High-Speed Rail (HSR) between San Francisco and Los Angeles. The approved route will pass through Gilroy on its way up to the peninsula. The City of Gilroy is working closely with the California High-Speed Rail Authority (CHSRA), other communities, and relevant agencies to plan for future land use and infrastructure within the Gilroy Station Area.

The development of the Gilroy Station Area Plan commenced in April 2015 after receiving a grant from HSR to plan for an HSR station in the downtown area. The Station Area Plan will act as a tool to guide private development and public improvements in Downtown over the next 25 years with a focus on the area near the future HST station and railroad tracks. This involves gathering input from the community on road alignment and land use for the station area.

Following a review of existing conditions, the project team created three alternative land use and circulation plans for Downtown Gilroy. The project team evaluated these alternative land use and circulation plans and produced an Alternatives Analysis Report. Community input received at public meetings and guidance from the Citizens Advisory Committee (CAC) helped create a Draft Preferred Alternative. The Draft Preferred Alternative was presented before the City Council on January 17, 2017 where they reviewed and provided comments.

The City Council held a meeting on June 5, 2017 to review a comparative assessment that evaluated and compared the three alignment alternatives being considered by the California High-Speed Rail Authority (CHSRA) for the Gilroy area.

The three alignment alternatives include:

During the review of the three HSR alignments, the question was raised about whether an alignment within the Highway 101 corridor might be viable and present fewer impacts to the City. The City chose to hire a consultant to explore that issue. Shortly after the City's consultant commenced work, the CHSRA decided themselves to look into that same issue. Ultimately, on December 6, 2017, a presentation was made to the City Council regarding the findings of both efforts. While there were some minor differences between the City's findings and the CHRSA's findings, both studies concluded that any HSR alignment within the Highway 101 corridor would not be preferable to one of the three initial alignments proposed.

After the City Council’s review of the comparative assessment of the Highway 101 HSR alignments, the City has decided to place the Station Area Plan Project on hold until the CHSRA identifies a preferred alignment alternative as a part of its Environmental Impact Report/Environmental Impact Statement (EIR/EIS) for the San Jose to Merced segment of its system.

Valley Water is committed to protecting our environment and is working to restore habitat along creeks and the bay. One such effort is the Uvas Creek Fish Habitat Improvement Project.

This project will improve habitat for steelhead trout and other native fish by strategically placing logs and gravel in the creek. These specially engineered features will increase habitat for juvenile and adult fish. This project will take place along Uvas Creek between Santa Teresa Boulevard and Miller Avenue in the City of Gilroy.

Construction is expected to begin this summer and take a few months to complete. Work will occur between the hours of 8 a.m. and 5 p.m., Monday through Friday and on Saturdays, when necessary.

While all construction activities will take place within the creek, trucks and equipment will need to cross the trail to access and exit the project location. This will result in temporary and occasional trail disruption near the project location, but no trail closures are anticipated. Flaggers will be on site near access points to direct traffic, equipment and trail users. Signs will be placed on the trail to alert trail users of potential upcoming stops.

The creek work is part of the annual Stream Maintenance Program, funded by the Safe, Clean Water and Natural Flood Protection Program. 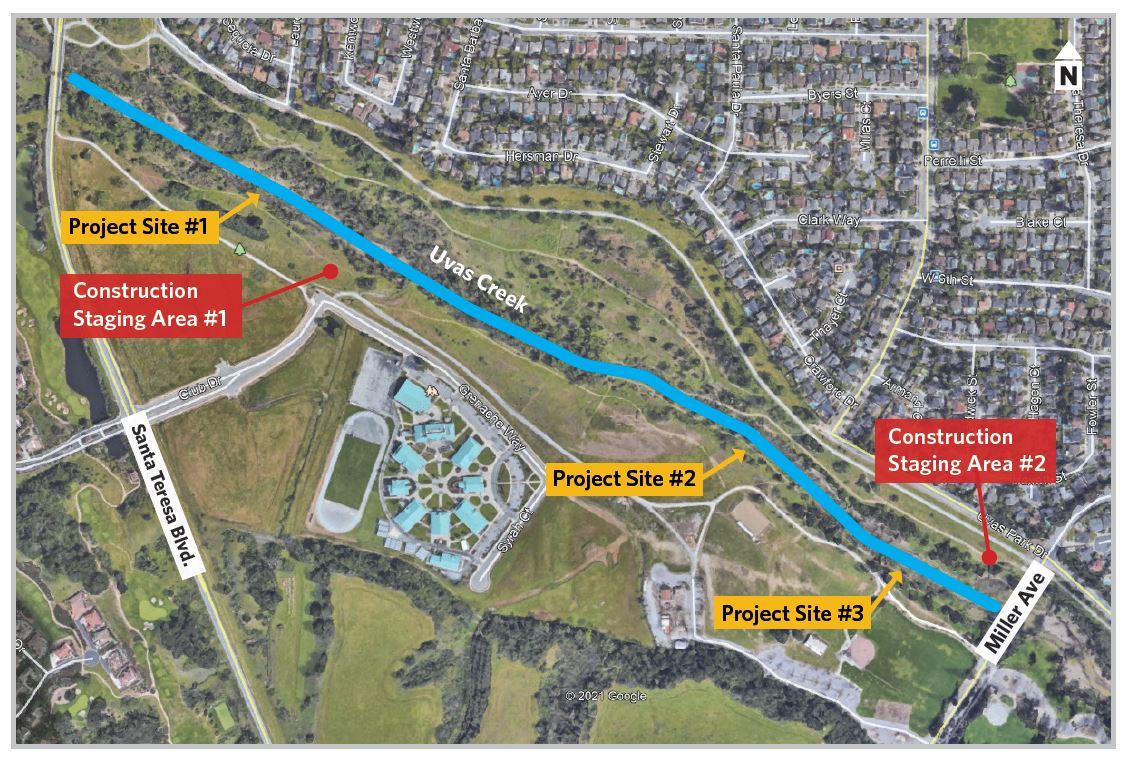 There will be four more scheduled detours on W. Luchessa Avenue beginning in August 2022. They will impact commuters traveling westbound between Thomas Road and Cimino Street. The eastbound direction of W. Luchessa Avenue will remain open throughout the project.

Starting August 9, westbound W. Luchessa Avenue will be closed between Thomas Road and Greenfield Drive. This closure is anticipated to be in place through the end of August. Detours will be in place. Please plan extra time in your schedule to accommodate the detour route.

The locations and anticipated dates of closures are as follows:

For more information about the closure or project please contact Valley Water Public Information Representative Jose Villarreal at 408-630-2879 or jvillarreal@valleywater.org.

For more information about the project visit Valley Water's Project Website at: https://www.valleywater.org/your-water/recycled-and-purified-water.

In mid-March 2022, Valley Water and its contractor will begin work on the South County Recycled Water Pipeline Project. The project will expand the distribution of additional recycled water in Gilroy, serve new customers, improve service delivery through system redundancy during outages, and support future system expansions.

Project construction is estimated to be completed by the end of summer 2023 and is being coordinated with the City of Gilroy and SCRWA, both long-term Valley Water partners, to supply recycled water in Gilroy.

As with many projects, Valley Water is proactive in researching and receiving state and federal grants for its construction prospects. Valley Water is receiving a $5.7 million grant from the United States Bureau of Reclamation from its Water Reclamation and Reuse Program to help reduce the project’s $23 million cost.

For more information about the project visit Valley Water's Project Website at: https://www.valleywater.org/your-water/recycled-and-purified-water.

For more information regarding this project please contact Caltrans at (510) 286-6115.

Caltrans has begun the next phase of the First Street Repairs which will include a complete repaving of First Street/State Highway 152 from the 101 on-ramps to Santa Teresa Boulevard. Caltrans has already started electrical and concrete work in the project area, including curb, ramp, and gutter improvements. These improvements will be followed by grinding and paving of the project area. The City will be meeting with Caltrans regularly to coordinate the work and will provide regular updates as the work progresses.

Additional information regarding the project can be obtained by contacting Caltrans at (510) 286-6115 or by visiting the Caltrans project website. 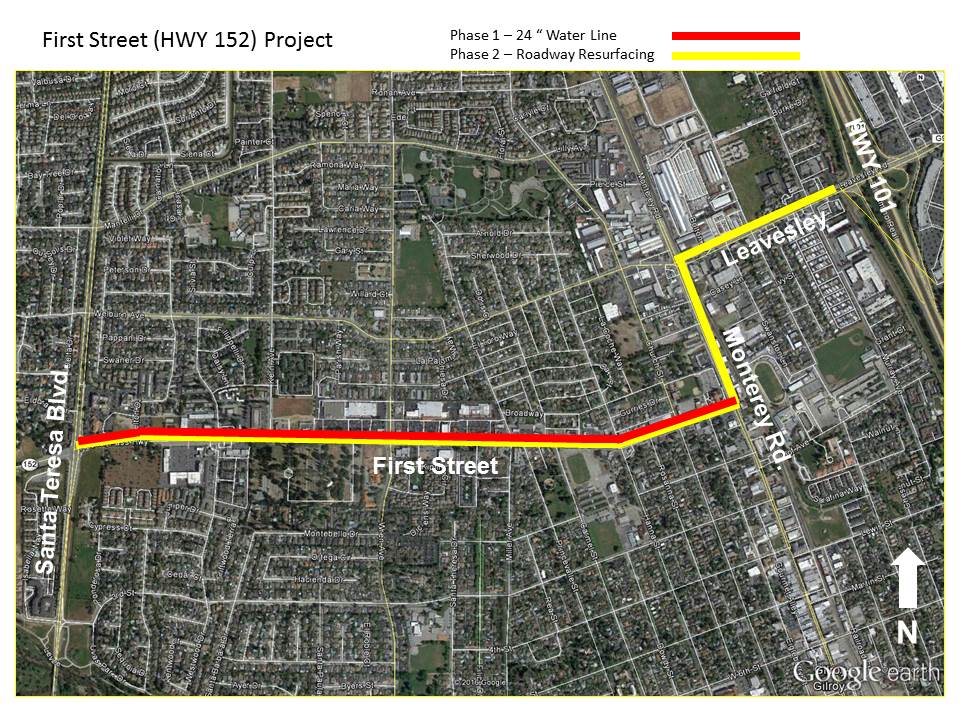 For questions or concerns regarding the Autumn Way Roundabout please contact Caltrans at: 510-286-6115

For questions or concerns regarding the multi-use trail please contact the City of Gilroy at: 408-846-0223

As part of the multi-use trail construction, some trees along the south-side of Hecker Pass Highway will be removed to make space for the trail which will be located in the open space on the edge of the roadway with a landscaped buffer between the trail-user and the highway.  Of the 354 trees currently located in the trail section, we anticipate that only 50 trees will need to be removed.

This project is anticipated to begin mid-March with completion anticipated by winter 2021, weather permitting.

We will work with the developer and Caltrans to provide regular updates to the community throughout the construction process. Thank you for your patience as we work on these much-anticipated transportation improvements in our community.